During your puppy's sixth month his physical growth slows down, but that doesn't mean he's done changing!

Your 'little' Rascal is becoming an adolescent (aka teenager) and with each month that passes he's going to be more confident and independent.

He may turn into a Jekyll & Hyde character as he straddles the fence between childhood and adulthood which can be a confusing and uncomfortable place to be.

Your pup will need lots of love, support and encouragement (not to mention a LARGE dose of patience) as he negotiates his teenage years.

One day they're the cuddly cuties you're used to, the next day they're brash, bratty and over-confident. 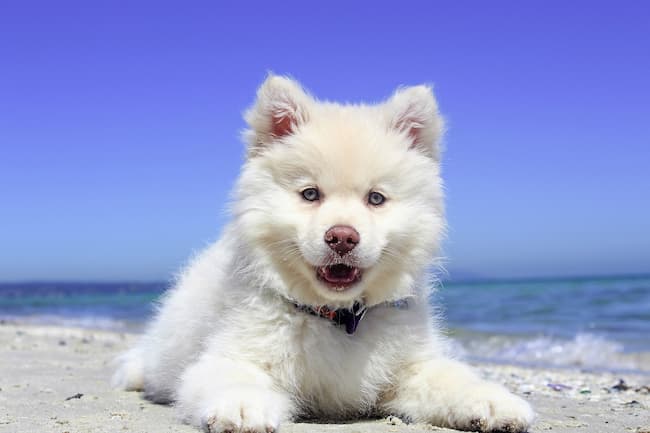 This month sees the end of the most critical period in puppy growth and development, but there are plenty of changes and challenges ahead to keep you both busy.

Welcome to parenting a pre-teen or teenage puppy!

The only scientific term to describe your puppy's sixth month development is not exactly scientific... it's called 'Adolescence'.

Some puppies also go through the Adolescent Shyness Period.

Whether your pup is a dominant or submissive character often becomes more obvious during this stage of development.

Some puppies seem to suffer from an attack of 'nerves' or shyness during this fifth month (Adolescent Shyness period ).

If Rascal suddenly seems shy around strangers or other dogs, or is nervous on everyday outings or when visitors arrive, this could be the what's happening.

Not all puppies experience these anxieties during this stage. It's most often seen in pups who didn't go through a second Fear Period during their fourth month.

Remember, not all puppies are created equal!

This means that if Rascal is destined to be a BIG dog, your not-so-little guy is still less mature, and more 'baby-ish' than his smaller cousins.

These big 'uns also reach sexual maturity a little later, usually at around 8 or 9 months old.

Here are the most important health-related topics relating to your puppy's sixth month: 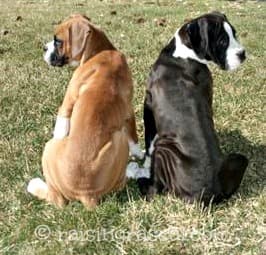 Your pup is approaching sexual maturity this month, and you may want to set up an appointment with your veterinarian to discuss neutering him (or spaying for females).

Veterinary guidelines still recommend that these procedures be done before your pup reaches sexual maturity to obtain maximum health benefits such as protection from reproductive organ diseases, as well as preventing unwanted pregnancies and reducing any negative side effects of the procedure.

Small to medium breed puppies may be ready for surgery at around six months, but for large and giant breeds waiting until they are twelve to eighteen months of age, fully grown and sexually mature is not recommended by many veterinarians.

Check out this page to learn more about how to determine when is the right time to neuter or spay YOUR puppy.

By the end of your puppy's sixth month he will most likely have all his adult teeth in place (the upper canines, aka 'fangs', are the last ones to come in).

This will eventually lead to a slow-down in the endless chewing that a teething puppy does, but many dogs (especially 'mouthy' breeds such as shepherds and retrievers) will have a strong need to chew on stuff their whole lives.

Puppy's Sixth Month: What He Needs

During your puppy's sixth month, he may not act as though he needs you at all - but he does!

All that energy that he had in month five? He's still got it, by the bucket load.

His self-confidence is growing by leaps and bounds too and he just wants to be a grown up. 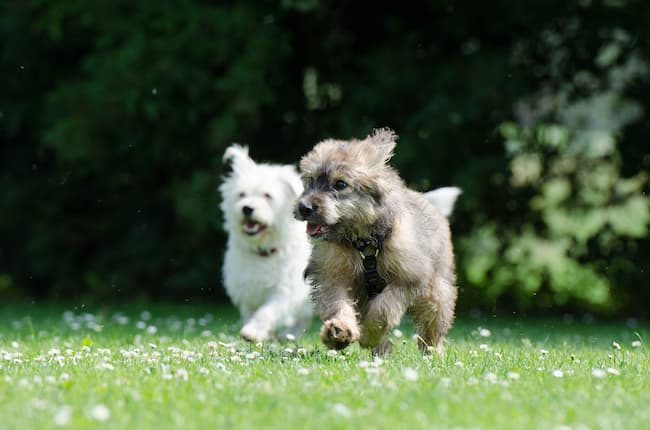 Here's what your six month old puppy really needs from you:

Lessons might be a bit more challenging these days because that sweet little pup who was so anxious to please you is likely just a distant memory - at least some of the time.

But the flip side of that is that little Rascal has a longer attention span, a stronger body, more stamina and is becoming his own person (ahem, dog) and that is fun to watch.

It's not unusual for an pre-adolescent puppy to challenge their owner's authority, to practice 'selective hearing' (another human teen talent), to be pushy, bossy or bratty.

Set your pup up to succeed and give him lots of praise and rewards when he gets it right.

Don't punish him if he gets stubborn or tries to 'talk back' or refuse a command. Gently but firmly insist he obeys before he gets rewarded.

Some pups want to be top dog all the time, and everywhere they go.

Others are happy to be followers rather than leaders.

If you have a multi-dog household they will likely work this out for themselves with minimum input from you.

But when it comes to the human pack members, your pup needs to know that every single one of them is his 'boss'.

Don't allow Rascal to be pushy or bratty towards any two-legged pack members.

There are all sorts of tips and techniques you can use to show your pup how the pack structure works in your family, and where his place is.

If your puppy is one who goes through the shyness that sometimes comes during the sixth month, don't stop socializing him or taking him out-and-about.

Just take it slowly, the way you did when he went through the first Fear Period at 8 weeks. Don't push him too far, or too fast, let him take it at his own pace, but do keep moving forward.

Your puppy's sixth month brings some changes to your responsibilities as a puppy parent.

Your goal from now on is not only to protect and take care of your little Rascal, but to help him learn how to stand on his own four feet as well. 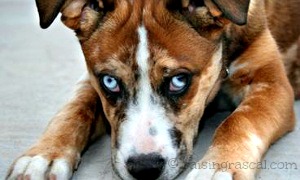 An adult dog needs to be calm, confident, friendly and well-mannered if he's to live happily in our human world.

A dog who is anxious or clingy because he hasn't been socialized properly, who doesn't know (or obey) simple commands, or who's never learned good manners around people or other dogs isn't going to be fun to live with.

So, your main responsibility this month, and throughout Rascal's teenage years is to make sure that he not only continues his training and socialization, but that he doesn't forget what he's learned up until now.

Teenagers can be trying, and sometimes it seems easier just to let them have their own way rather than put in the effort needed to guide them in the right direction.

BUT that only leads to a confused, insecure adolescent who makes decisions based on impulse and emotion rather than experience and common sense. It never ends well.

Don't allow Rascal to be that teenager!

Be consistent, patient, loving and firm. Insist that house rules are met, lessons are learned, and manners are shown.

One day, when he's an adult dog, you'll see the rewards for your efforts and you'll both be so much happier for it.

If you notice sexually motivated behaviors such as mounting, spraying or male-to-male 'posturing', always discourage them gently but firmly.

Don't allow your adolescent pup to play too rough, or to squabble with other adolescent or adult dogs. 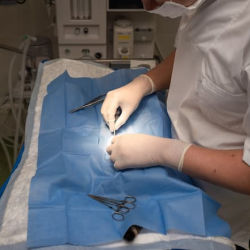