There are several simple ways to stop puppy biting and nipping, but it's important to realize that this behavior isn't your puppy being 'bad'!

ALL puppies bite and nip at some time, and to some degree. It's totally normal.

It's one of the most misunderstood puppy behaviors.

If you watch a litter of puppies playing together you'll notice lots of biting, growling and tussling. This is how they communicate and how pack structure is sorted out, naturally.

When you bring little Rascal home he only knows how to behave like a dog.

He has very little (if any) idea about what's acceptable in the human world and his behavior is instinctual.

He uses his teeth and his voice to communicate, to figure out where he fits in this new pack, and to make his opinions known!

He's not being 'bad' or 'aggressive' or anything like that. He's just being a puppy. 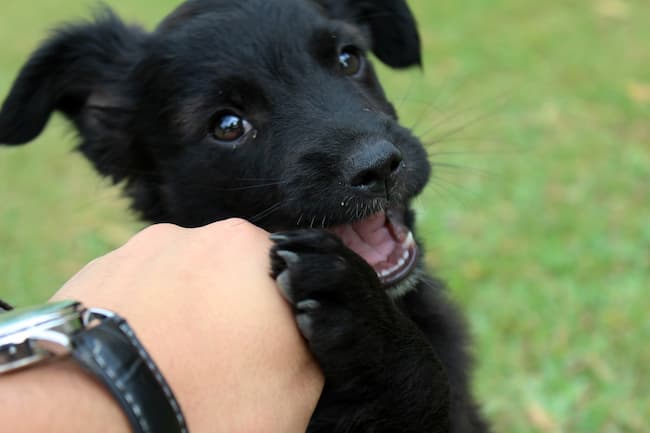 Some breeds are more inclined to be 'mouthy' than others. This is down to the role they were originally bred for.

It shouldn't be a surprise to learn that breeds who were designed to use their mouths as part of their job are much nippier than others. It's simply hard-wired into their DNA.

Breeds which are especially mouthy include herding dogs such as the German Shepherd, Border Collie, Australian Shepherd, Shetland Sheepdog, Australian Cattle Dog and many more.

To a degree it also includes some hunting dogs who were bred to retrieve game such as Retrievers and Spaniels.

How To Stop Puppy Biting

Of course, just because a behavior is normal or natural in one situation, that doesn't mean it's acceptable in another, and little Rascal has to learn that biting/nipping humans is a no-no.

Any puppy can learn to stop puppy biting, but they won't all learn at the same rate.

How quickly your puppy learns to keep his teeth to himself can depend on a number of things include:

There are different corrections that you can use to show your little Rascal that nipping is not allowed.

Which one works for him depends on the three elements above... and how you use them.

I've listed them below in order of strength, ie the mildest correction is first and the strongest one last.

Start with the mildest one and use it consistently for several days to give your puppy a chance to understand what he's seeing/hearing.

If after that time you see no improvement, move on to the next one and repeat the process.

Basically this means show him it hurts, then ignore him!

It's the simplest technique to stop puppy biting and works best with very young puppies and with those whose personality is gentle and submissive.

You probably understand the concept that any attention is desirable, even if it's negative attention.

This correction works on that principle.

When Fido starts nipping at your hands:

Puppies crave your attention and interaction. 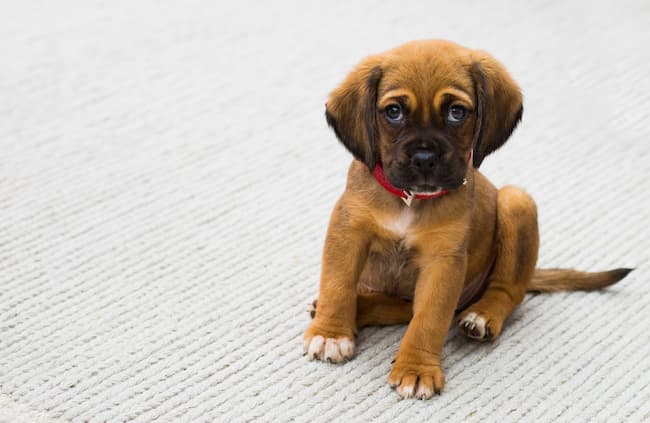 For some, once they make the connection between the nipping and the loss of your attention it's enough to make the behavior fade away.

Some puppies aren't phased by losing your attention for a few minutes. They're focused on nipping at you and if they can't reach your hands they'll nip at your heels or pant legs.

If your little Rascal is one of them try this:

For puppies who don't show any lessening of their biting/nipping with either of the above corrections, you need to be a little more direct.

I've never met a puppy who didn't learn from the muzzle wrap, but you need to use it gently and consistently.

I believe this technique is so successful because it mimics natural dog behavior.

A momma dog may gently grab her puppy's muzzle with her mouth to discourage him from nursing when he's ready to be weaned.

Adult dogs sometimes correct a puppy who is misbehaving in the same way.

This means that your little Rascal will naturally recognize the feeling of having his muzzle held as a behavioral correction.

To use the muzzle wrap technique to correct puppy biting:

The Time Out is never used alone, but as a reinforcement for the other techniques.

Some puppies refuse to listen or respond in the right way when you correct them, especially at first.

If little Rascal comes back at you nipping and biting regardless of being corrected, he gets a time out after the third time.

Essentially three strikes and he's out!

Tell him 'No bite' for the fourth time and take him immediately to his crate, calmly and without being angry or upset.

Put him into his crate and always make sure he has a sturdy chew toy as company as chewing is a stress reliever for puppies and dogs.

Give him 10 minutes of crate time then he's allowed back out (don't forget a potty break as soon as you release him) to play.

It's not just our hands, feet or clothes that puppies like to bite or nip.

Puppies also love to bite at their leash, often turning what you planned on being a nice walk into a long game of tug-of-war. 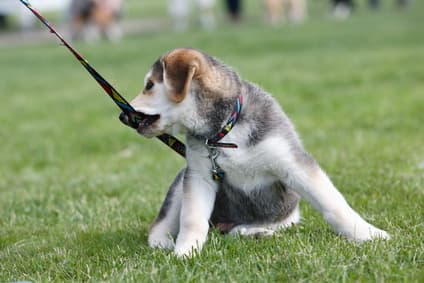 There are a couple of different things you can do to stop your puppy biting at his leash.

The first one is a practical approach which focuses on making the leash less attractive to your pup.

If Rascal doesn't enjoy chewing on it he'll be less inclined to do it.

Leather leashes are the 'gold standard' and come with a price tag that reflects that. They also taste great to puppies.

Your best bet is to stick to a simple, inexpensive leash (NOT the retractable kind, those aren't safe for you or Rascal) until your puppy is old enough to have outgrown the leash-biting stage.

Making the leash taste unappetizing is a good strategy.

You can spray it with Bitter Apple Spray which is specifically formulated to be used on items you don't want your pup/dog to chew.

FYI - Bitter Apple spray works great when applied to your pant legs to stop your puppy biting them!

Other things you can do to make the leash taste bad are:

The second way to approach this behavior problem is a behavioral one, and focuses on getting your little Rascal to realize that there's a negative consequence to his actions.

Remember that your pup is just a baby so any 'lesson' has to be simple and repeated often.

If you're walking your pup and he decides to start biting at his leash, tugging and chewing on it... stop walking.

At first he probably won't even notice. Don't scold him, or try to tug the leash out of his mouth. Any attention at this point will just get him excited and he'll think it's a great game.

When he finally stops playing with it and looks up at you to see what's happening, say 'Good boy' and start walking again. If he starts attacking the leash again stop walking and repeat the whole process.

If you can't stop your puppy biting at the leash for more than a few seconds, it's okay to pick him up and head home after half a dozen stops.

This obviously will make your 'walk' much less of a fun experience, for either of you.

But your little guy will figure out what's happening sooner or later and his desire to walk, sniff and explore will override his desire to bite on his leash.