Is My Puppy Sick?

If you're asking yourself 'is my puppy sick' you have most likely already noticed that something doesn't seem right.

Puppies are at risk of catching a number of different illnesses, they can have puppy worms or other parasites, and they can hurt/injure themselves both on the outside and on the inside (usually by eating stuff they shouldn't), so if you even think something is wrong it's important not to ignore that feeling.

A sick puppy can have some obvious symptoms such as vomiting or limping, or vague ones such as being less hungry than normal or sleeping more.

Any sudden change in Rascal's behavior can also be a sign that all is not well.

These behavioral changes might include sudden anxiety or aggressive/defensive behavior, hiding, restlessness, unusual vocalizing, significant change in appetite or your puppy is not eating etc.

So in order to figure out whether or not your puppy is sick you'll need to pay attention to how he looks and how he behaves.

Signs That Your Puppy Is Sick

Some symptoms of illness pretty much rule out the question of whether or not your puppy is sick, because there is obviously a problem!

The most common symptoms of illness in puppies are:

These are the 'Big-3' when it comes to diagnosing a sick puppy.

If your little Rascal throwing up or has diarrhea he most likely needs to be seen by your veterinarian. 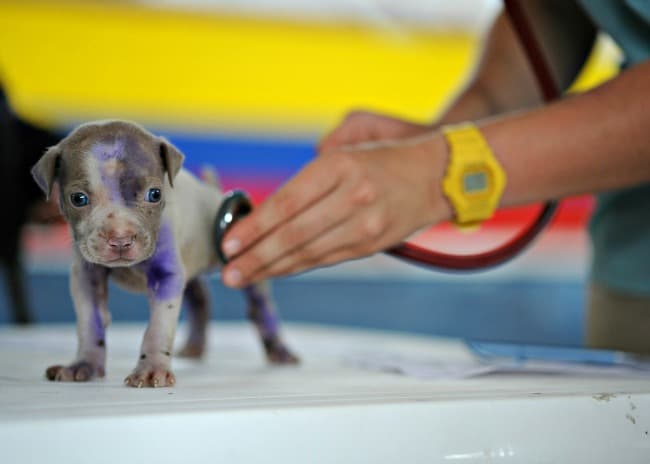 If he also seems exhausted and disinterested in the world around him, you could be facing an emergency situation.

This is because these three symptoms are common signs of Parvovirus, Coccidiosis or Giardia, and an immediate veterinary consult is essential.

Other canine illnesses such as Adenovirus and Leptospirosis also usually begin with vomiting and diarrhea.

If your little guy ingested something toxic or dangerous he may vomit, or have diarrhea, but other symptoms of poisoning (which may sometimes show up first) include restlessness, shaking, drooling, dilated pupils, breathing problems (rapid or slow), heart irregularities, lethargy, loss of co-ordination, convulsions and more.

When both diarrhea and vomiting are present, dehydration also becomes a real threat and that alone is enough to cause a puppy serious trouble.

Sometimes a tummy upset due to a sudden change in diet or eating something (non-toxic) that he shouldn't have can cause one or two loose stools and perhaps make your pup vomit once or twice.

In this type of situation your pup will usually be active, alert and acting normally in all other ways.

Although he may not want to eat he should be able to drink water, and keep it down.

His interest in treats, belly rubs and toys should be the same as always and he may not look ill.

When this happens, you can usually wait 24 hours and see if little Rascals digestive system returns to normal.

BUT if he vomits or has diarrhea more than twice, or seems to be sick in any other way, get him examined by a veterinarian immediately.

If you haven't seen the definitive symptoms above but you're still worried and asking yourself 'is my puppy sick?', here are a few other things to look for.

Other symptoms you might see in a sick puppy can include:

Some of these symptoms are ambiguous and could potentially mean your puppy is really sick, or could simply be a sign of something minor.

Unfortunately it's often impossible for us, as puppy parents, to tell the difference!

Young puppies can get very sick, very quickly, and I highly recommend not taking a 'wait-and-see' approach if you are at all worried about your puppy.

An unnecessary vet visit is a much better outcome than a sick puppy who didn't get the help he needed in time.

Canine Parvovirus is one of the major threats to young puppies and it can strike quickly and has been known to kill within 24 hours.

Always better to be safe than sorry.

If your puppy seems sick and it's outside of normal veterinary hours (and in my experience this is usually when illness strikes) use the information on this page to evaluate him.

Any real concern should send you, and Rascal, straight to a 24 hour pet hospital or emergency veterinarian.

Fever in Puppies (and Dogs)

A normal canine temperature is higher than that of humans, so if you take little Rascal's temperature and it's 100F don't panic and think he has a fever.

These figures are for rectal temperatures in puppies/dogs (this is the most accurate method)....

Newborn puppies have a temperature 95F and 99F, which increases gradually over the first few weeks.

Normal temperature for puppies between 1 and 4 weeks of age is usually between 97F and 100F, again this increases gradually as they get older.

Normal temperature for puppies over 4 weeks old and adult dogs is generally anywhere between 100F and 102.5F, with an average being around 101F.

Anything over 103F could be considered a fever for both puppies and adult dogs.

Illness As A Side Effect Of Vaccination or Medication

Puppies can also show signs of being unwell if they have a bad reaction to puppy shots, or to medications, such as puppy worm medicinesfor example.

Although adverse puppy shots reactions are fairly common, that doesn't mean they are 'normal' and if you notice anything out of the ordinary after little Rascal has been vaccinated keep a close eye on him and take him back to your veterinarian if you're worried.

Some side effects (such as a severe allergic reaction which I discuss below) are likely to happen very quickly.

Other reactions can show up in the first 24 or 48 hours after vaccination, or even weeks or months later.

Over-vaccination is believed to cause a myriad of auto-immune conditions, cancers and other chronic diseases in dogs.

I'd suggest researching puppy shots to make sure you are aware of what the average protocol is and decide what YOU are comfortable with allowing your puppy to have. Get all the info. you need from the two links earlier in this section.

Severe allergic reactions to vaccines or medications can happen, and they are usually life-threatening.

Signs of an allergic reaction include:

If you found this page while searching for tips on making sure the puppy you are bringing home is healthy, here's the information you need.

The signs of a healthy puppy include:

To take a quick look at the other side of the coin, here's what you don't want to see.

The signs of an unhealthy puppy include:

With newborn and very young puppies (under 3 weeks old) you look for some very basic things in order to evaluate how healthy they are.

A healthy newborn/very young puppy should:

An UNhealthy newborn/very young puppy may: 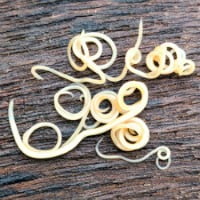 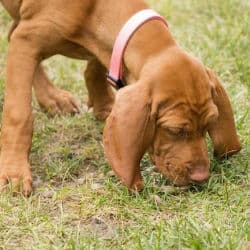