During your puppy's fourth month your puppy may already seem light-years away from that roly-poly little guy you brought home just a few short weeks ago.

Rascal is much less 'babyish' in his movements, actions and re-actions.

He thinks he's a 'big boy' and is active, friendly and outgoing.

A tendency towards 'bossiness' and the occasional challenge to your authority give you hints of the teenager waiting in the wings.

But he's still your cuddly little furball, always ready for a game, or a snuggle.

During this fourth month your pup begins to understand social hierarchy.

That's where he fits in the pack (that's your family), and in the wide world outside his front door. 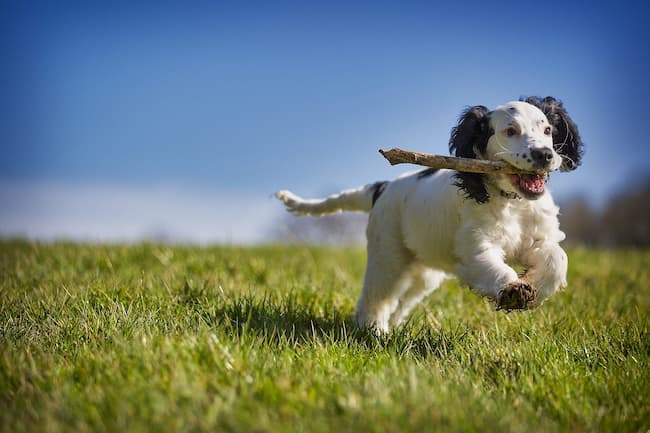 During your puppy's fourth month his social development is in high gear. 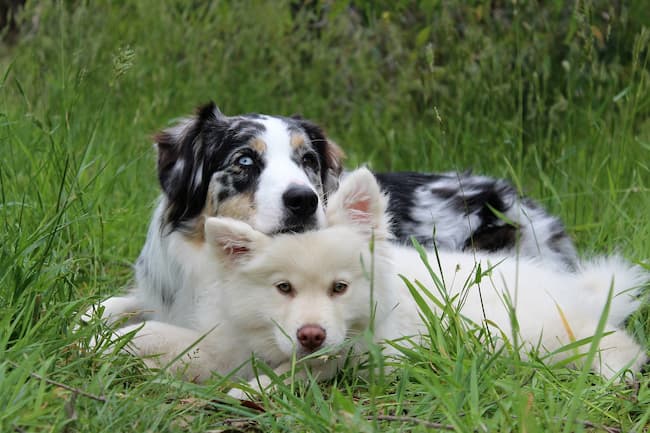 He's building on the socialization and interactions that he started on during the second and third months, and has hopefully come through the first Fear Period unscathed.

Now he's focusing on figuring out the pecking order in his very own pack, especially where he fits into the mix.

He's also looking further afield and begins to explore dominant and/or submissive behaviors especially when interacting with other dogs and puppies.

Your pup is changing physically too and the chubby little baby you picked out at the breeders has probably been replaced by a much taller, longer and leaner pup.

If your Rascal is a large-breed he is probably growing by leaps and bounds and is at the mercy of huge paws, long limbs that won't behave themselves and a head that seems too big for his shoulders. This is all normal.

These big pups grow most rapidly between birth and 5 months, while medium and smaller breeds are showing a slow-down in this area.

This month continues along the same lines as the previous ones in terms of veterinary care.

These are the key points:

Most puppies will be getting their third round of combination vaccines plus a Rabies shot.

This is usually as much protection as you can give him from the most common contagious dog illnesses. Vaccines aren't foolproof, but they are fairly reliable.

Some breeds that are especially at risk from Parvovirus, such as Rottweilers and Pitbulls, should have a fourth Parvo vaccination next month.

During this month your pup will continue to lose his 'baby teeth'.

You might see a spot of blood on his toys, or find a tooth on the carpet.

Large, extra-large or giant breed puppies are at risk of joint, bone and ligament problems due to their phenomenal growth rate.

A diet that isn't too high in protein plus limiting vigorous exercise, especially on hard surfaces such as cement, can help protect them from these problems.

Gums may look a little sore or red, and he'll want to be mouthing/chewing on everything until this teething stuff is over.

Normally teething is a pretty straightforward process, but occasionally a baby (milk) tooth will refuse to be pushed out and Rascal will end up with a double set of one tooth,or maybe even several teeth.

If the milk tooth seems wobbly you can give it a chance to fall out on it's own.

But if, after a few weeks, your pup still has both a baby and an adult tooth in the same space it's time to talk to your veterinarian about removing the first one.

Puppy's Fourth Month: What He Needs

During your puppy's fourth month he is still totally dependent on you.

But the other people and pets in his life become increasingly important to him too. 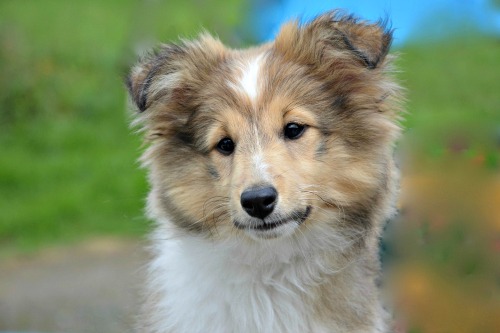 This is because month four is when Rascal gets all pro-active about finding his place.

He needs to work out where he fits into the pack structure in his home, and outside of it.

Here are the most important things your puppy needs in his fourth month:

Little baby toys won't do the job now. Choose really well-made, durable toys that won't break or shatter and that he can't tear into pieces.

Those at-home obedience lessons that you started last month should be a regular, and fun, part of your day by now.

Soon he'll be finishing up his formal Puppy Class and will be ready to start on a Basic Obedience Course. EVERY puppy needs to get at least one of these under his belt!

As a puppy parent, your main responsibilities during your puppy's fourth month are to:

Ongoing training and socialization is still critically important because this is the beginning of a challenging period of puppy development - adolescence.

If you've raised human teens you have some idea of the kinds of behavior you're going to be dealing with, if not - you'd better get ready for some challenges to your authority.

Between weeks 9 and 12 your little one is going to start testing the waters by trying to push himself off the bottom of the heap position.

Puppies are super-smart and most of them instinctively know who's in charge, but everyone else is fair game.

Small/young children, older or frail/weak/sick adults and shy, quiet or timid adults are usually the first ones challenged.

During this month, and the next half dozen, you'll need to consistently show your pup that all humans (no matter how small, or quiet) are to be respected and obeyed...... children are not puppies and they're his superiors too!

Outside of the home he may get bossy or pushy with other puppies or dogs.

Most older dogs will tolerate only so much and then put him in his place.

A group of pups will usually work out the pecking order themselves, some showing dominant behaviors, others being more submissive.

If you have other dogs or pets at home the same thing will happen. Most of the time they will figure it out without any major issues.

Indoors or out, you only need to step in if someone is actually in danger of getting hurt.